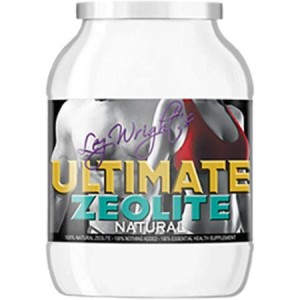 Read More About This Product

Zeolites are naturally formed by volcanoes. When a volcano erupts, the molten lava combines with thick ash, this then mixes with sea salt resulting in the production of zeolites.

What can Ultimate Zeolite do for you?

The body is designed to be able to heal itself, however this ability becomes impaired by the absorbtion of everyday pollutants. Lez Wright’s Ultimate Zeolite powder can absorb toxins, heavy metals and unwanted chemicals.

Everyone over the course of time absorbs high levels of heavy metals and toxins. Once these pollutants build up, they begin breaking down the body’s cell structure and cause free radicals to be produced, eventually leading to a poor immune system and subsequent bad health.

When heavy metals are removed from the body, normal functioning can take place again. Any ailment that you may be suffering from including headaches, dizziness, high blood pressure, weight gain, severe weight loss, cancer, allergies, digestive problems etc could be caused by the build up of pollutants and heavy metals inyour body.

Lez Wright’s Ultimate Zeolite can be integrated as a detoxification component in most if not all comprehensive treatment programs.

Zeolite is virtually tasteless and odourless.